This year’s sports day was on the Isle of Muck, like it was last year.  The nursery came too. We practiced on Laig Beach before we went.   We practiced football, the sack race and running.  And Maggie dug a hole all the way to Australia.

There were four teams with Muck and Eigg primary schools mixed up all together.

We did lots of races.  There was a water race where you had to run carrying water in cups with holes in the bottom.  You have to pick up the water and run to a bowl, pour it out and then run back and give the cup to the next person. At the end of the race, the team with the most water in the bowl is the winner. The bowls have to be the same size.

There was a really fun race called Dress up the Teacher Race. The children had to run and pick up one item of clothes from the dressing up box and put it on the teacher.  We put hats and gloves and t-shirts on them.  We put a skirt on Miss Fees but she was too big for it, so we could only put it on her arm.  The winning team was the one which had put the most clothes on the teacher.

We had lots of cake after the sports day – they were yummy. 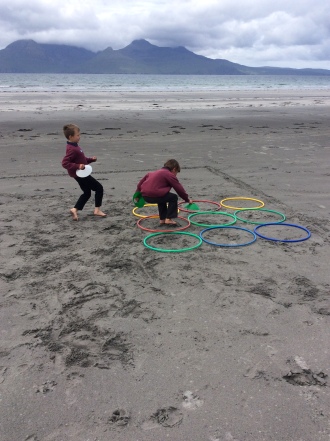 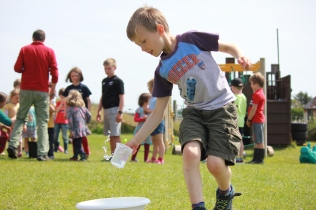 Blog by Ben and Tadhgan